How Governance Works At EAST

Governance of EAST is strong and principled, undertaken by Governors in each school (Local Governing Bodies - LGBs), a Trust Board working across the MAT and an overarching Members Board. The collective knowledge, skills, experience and insight of all these individuals ensures that Governance in our Trust both challenges and supports each school to ensure the best outcome for our learners. Our Board ensures that EAST complies with charity and company law requirements. In accordance with Academy requirements, the Trust follows approved Articles of Association and delegates functions to the LGBs of each academy through a Scheme of Delegation.

The Chief Executive Officer (CEO) and Director of Finance and Operations (DFO) are the paid executives appointed by the Trust. The CEO & DFO attends all Board Meetings. Whilst the CEO attends all Committees, the DFO attends the Finance and Audit Committee and other meetings as required. The Headteachers' of EAST schools attend committee meetings upon invitation. 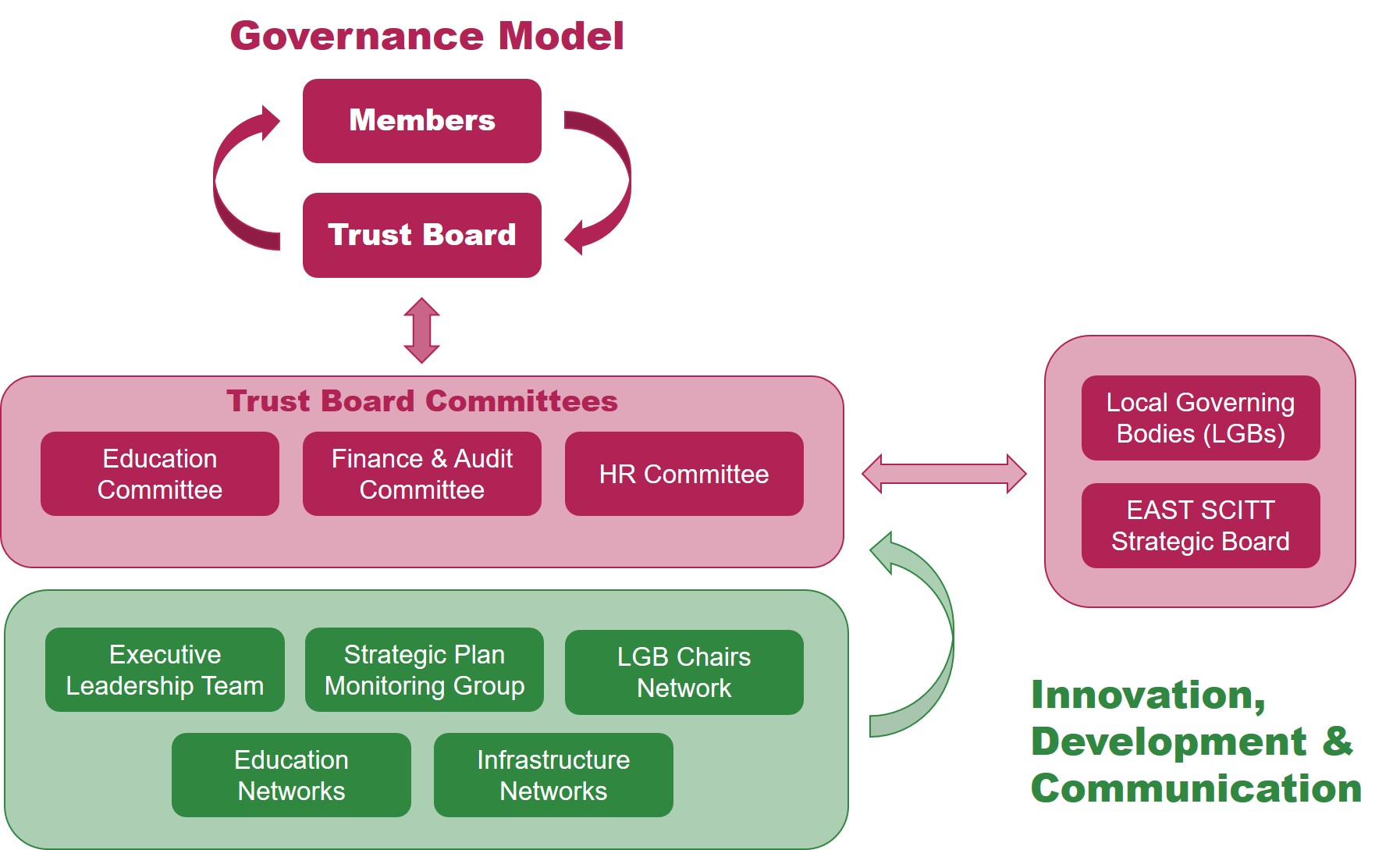 The quoted text below is taken directly from the document entitled, ‘Academy Trust Governance - Structures and Role Descriptors’ (October 2020), published by the Department for Education (DfE). It has been used directly in conjunction with EAST’s structure and roles to indicate best practice and adherence to DfE guidelines within our Trust.

"Members play a limited but crucial role in safeguarding academy trust governance. While they must ensure they do not stray into undertaking the Academy Trustees' role, they should assure themselves that the governance of the trust is effective, that Academy Trustees are acting in accordance with the trust’s charitable object(s) and that they, the Members, use their powers to step in if governance is failing. Academy trusts are founded by Members, who may then appoint additional Members to join them. The first Members are the signatories to the memorandum of association which is drawn up when the academy trust is first established. These first Members agree the academy trust’s first articles of association, which include the academy trust’s charitable purpose.

Members should not be involved in the day-to-day business of the academy trust and must ensure they do not assume the powers of the Academy Trustees. However, they do have an important role in an academy trust, based on a number of key powers set out in the department’s model articles of association and in company law…These include powers to appoint and remove the board and direct the Academy Trustees to act in certain circumstances.

Members have a general duty to exercise their powers to further the academy trust’s charitable object, which in the majority of trusts is ‘to advance for the public benefit education in the United Kingdom’… It is essential that Members are aware of the powers available to them and know when and how to use those powers effectively."

"Members help to ensure that Academy Trustees are exercising effective governance by utilising a range of powers which are outlined in EAST’s Scheme of Delegation."

"The academy trust must have at least three Members, although the department’s strong preference is for academy trusts to have at least five Members. Having more Members increases the range of perspectives represented and ensures that Members can take decisions via special resolution without requiring unanimity. Members can be individual people or corporate bodies. Employees of the academy trust must not be Members. The department’s current model articles of association for trusts do not allow Members to be employees."

Independence from the Trust Board

"… The department’s strong preference is therefore for at least the majority of Members to not sit on the trust board.

It is important for Members to be kept informed about academy trust business so they can be assured that the trust board is exercising effective governance. This must include providing the Members with the academy trust’s audited annual report and accounts.”

Louise Franks - Chair of Trust Board

"The trust board is the decision-making body of the academy trust and is accountable and responsible for the academy (or all the academies equally) in the academy trust. The academy trust will also be the employer of any central staff and those within its academies. Everyone in governance should be aware of and accept ‘The 7 principles of public life’, as set out by Lord Nolan.

Academy Trustees are the people who make up the trust board, in some academy trusts, particularly in relation to academies with a religious character, they may be referred to as directors. Academy Trustees are both the charity trustees and company directors of the academy trust. The ‘competency framework for governance’ outlines the knowledge, skills and behaviours needed by trust boards for effective governance’…

The trust board must operate and make decisions to further the academy trust’s charitable object, which in the majority of trusts is ‘to advance for the public benefit education in the United Kingdom’…The Academy Trustees are responsible for the general control and management of the administration of the academy trust.

Subject to the provisions of the Companies Act, the academy trust’s articles of association and the Members’ ability to direct the trust board by special resolution, the Academy Trustees may exercise all the powers of the academy trust. They have statutory duties to exercise care, skill and diligence and avoid conflicts of interest.

As the strategic leader of the academy trust, it is vital that the trust board is connected with, and engages, the communities and stakeholders it serves. In the interests of transparency, the trust board must publish on its website up-to-date details of the overall governance arrangements it has put in place…

The role of the Academy Trustee is a voluntary one…

As set out in the Governance Handbook, all trust boards have three core functions:

…Trust boards should also have regard to the need for the Executive Leader and teachers in their academy(ies) to be able to achieve a satisfactory work life balance, and, through their strategic role, should provide support and challenge to help reduce unnecessary burdens, for example, in relation to the number of data requests that are made."

"The board is the academy trust’s key strategic decision maker. It may delegate certain responsibilities to the Executive Leader (in certain circumstances) and in accordance with the academy trust’s scheme of delegation, a committee or an individual, but the trust board remains accountable and is responsible for all decisions made. The trust board must make decisions in the best interest of pupils, not personal interests, and welcome a diverse range of viewpoints when debating decisions. Good decision making is well informed by both available evidence of what works or is likely to be effective, and by the views and needs of key stakeholders, particularly parents.

Boards should play a strategic role and avoid routine involvement in operational matters. They should focus strongly on holding their Executive Leader to account for exercising their professional judgement in these matters and all of their other duties. However, since the board is responsible in law for the school(s), it may need to intervene in operational matters if a circumstance arises where, because of the actions or inactions of the Executive Leaders, the school may be in breach of a statutory duty. Having advised the board, Executive Leaders must comply with any reasonable direction given by it."

"The trust board may establish committees and may choose to delegate functions to them. Where the trust board does delegate functions, the trust board remains responsible and accountable for decisions made. The department’s Model Articles of Association set out reporting requirements that support Academy Trustees to exercise their accountability where delegated powers are used. An academy trust will have a scheme of delegation detailing the organisation’s delegation of powers. This should be made available to all Academy Trustees and those on Local Governing Bodies (LGBs).

Further details can be found in the Terms of Reference (ToR).

"Academy trusts with multiple academies may establish a type of committee known as a Local Governing Body (LGB)... A Trust board may decide to set up one or more LGBs to oversee an academy or group of academies in the academy trust. Unless the trust board has at least two parent Academy Trustees, each LGB in an academy trust must include at least two parent local governors. Arrangements for the election of parent local governors (and parent Academy Trustees) are set out in the model articles of association. Parent trustees and parent local governors bring an important perspective but have the same responsibilities to the trust as other Academy Trustees and local governors and need the same skills. Their role is to support the trust, rather than act as parent representatives. Having parents on LGBs (or trust boards) is not a replacement for engagement with parents more broadly. All trust boards should assure themselves that mechanisms are in place for their organisation to engage meaningfully with all parents and carers.

"The Academy Trustees will decide what, if any, governance functions they will delegate to LGBs. They may set up LGBs as wholly advisory bodies. Academy Trustees may choose to vary the extent of delegation over time, for example to reflect a change in capacity at local level.

LGBs are a full and formal part of the trust governance structure and can: